An Interview with R. Thunder of the Rochester Knighthawks

Mascots are people too. No, seriously, sorry to ruin the illusion…. But there’s someone inside that giant furry dog costume over there.

There’s also someone inside of R. Thunder, the hawk mascot of the Rochester Knighthawks. That someone is professional mascot performer, Nick Hadad. Nick took half an hour out of his busy performance schedule to do an interview with us recently. In this interview, Nick shares thoughts on safety, transitioning from casual to professional performer, plus some tips on how to get the best out of your costume. 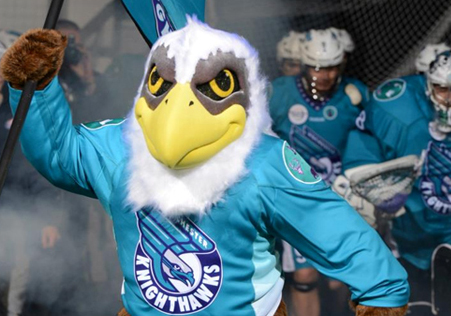 R. Thunder leading the charge. “One of my favourite moments at games! Such a rush,” Nick says.

Q: What is your favorite part of being a mascot performer?

A: I’ve been a performer for almost thirteen years, so there are a few things that have kept me in those costumes year after year: Getting thousands of fans on their feet and screaming at our home games, getting out in the community and bringing awareness to charities and local events that do good things in our area, getting the chance to put on a good show when a bunch of us local mascots are together for an event or a mascot themed sports event, etc… but without a doubt, what I really love is just being able to brighten someone’s day. At games and at community events, I’m interacting with countless people, many are families with children. Being able to pose for a photo, slap a five and give a hug or two puts a smile on people’s faces no matter what age they are and I’d like to think, even if it was for just a brief moment, I made them happy.

Q: You recently had a new costume made by Sugar’s. Is there an improvement to your costume that has made a big difference for you?

A: There are a few! Firstly, R. Thunder looks happy! His old looks made him seem mean and tough, which seemed to bother a lot of our younger fans. Since his makeover, he’s won over a lot of folks who had been shy around him in the past.

Secondly, his sporty sneakers are amazingly easy to get around in. Running, jumping, climbing stairs, making quick turns, navigating wet surfaces and sprinting on the turf during our game day introductions are so much easier to do! This of course makes Thunder VERY happy!

The big feathery hands and the tail feathers are great as well. It’s like Thunder has grown up and he’s become a mature hawk.

Q: Do you have a favorite mascot? Is there a mascot whose performance style or costume you admire?

A: That’s a tough one. Over the last thirteen years, I’ve worked with a lot of different characters between my stints in Maryland and up here in western upstate New York. I’ve performed alongside some very dynamic characters and have learned a lot from them, including the Oriole Bird, Sabretooth, Talon (from DC United), Rapidman (former mascot of the Colorado Rapids) and a plethora of AHL mascots from my days in hockey. And that’s not to mention getting advice and tips from performers like Erin Blank, Mike Walsh, Mike Julius and many others.

I’ve always liked eagle, hawk, falcon, wolf, fox and coyote mascots. Folks usually seem to put a lot of thought into their design and the performer can have a lot of fun creating a character by just using some of the costume’s physical attributes (i.e., a long tail, floppy ears, a sly grin, big padded paws, large wings, etc…). I also like them because over the last thirteen years, I’ve had a chance to be many of those species. Each one is unique and quite entertaining.

Q: Do you have a signature move? If yes, please tell me about it! 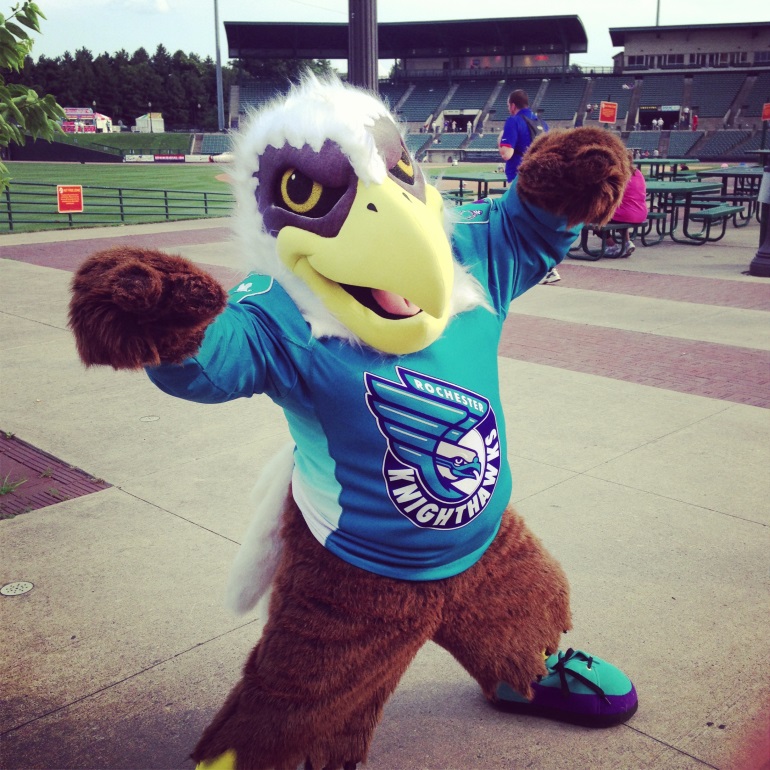 A: During intros, Thunder sprints in waving a massive flag ahead of the players. It’s not so much of a signature move, I guess, but it certainly gets the crowd going. It’s also one of my favorite moments at games. Such a rush!

A move that is exclusive to R. Thunder is the double-pointed-wings-head-tilt. This is a fun pose used to greet fans and to pose with during photos. It really works well with his facial expression and his feathery hands.

A: At this point in my career, I’ve mascoted for every sport. Each one is different in terms of atmosphere, game day operations and pacing. Lacrosse is fast paced and action packed which keeps me on my toes constantly; things change in an instant. The fans are very active, loud and intense, which I love. We pack our arena full of fans every game and they always bring such an amazing atmosphere with them. It’s a wild ride and I’m hooked.

The pacing of an indoor lacrosse game is different from other sports I’ve been involved in, with shorter breaks between periods, fewer breaks during gameplay and a decently timed halftime. As a mascot, this requires a good sense of timing. I have to make sure I balance out a good amount of time in the stands with the fans while making sure I am ready for promotions during time outs or during breaks between periods, factor in time to visit our suite levels and I have to save enough energy for our post-game autograph sessions.

Q: What advice would you give to a performer looking to become a professional mascot?

A: Don’t be afraid to start out small and on a lower level. I had dreams of being a mascot working for a huge team when I was just in middle school. I was able to be my high school’s mascot and it was a great time to learn the basics of performing. You can practice and perfect moves, sharpen your pantomiming skills, and get a taste for what it’s like to mascot for a range of different sports.

Start building a resume. This is a mascot performer’s ticket to their next job. What skills are you proficient with? Can you sew, clean and maintain a costume? Have you coordinated skits? Can you dance? Have you worked as other mascots for charity groups or local businesses? Make sure you have it all down. It might be a good idea to have a 30 second or a minute long highlight video of you in action. Gain as much experience as you can and be grateful for each event and game you’re able to do.

If there is a specific team you’d like to work for, it is a good idea to attend their home games as often as possible. Take note on how their game day operates; pay attention to how the mascot takes part in introductions, promotions, and how their character factors into game day entertainment. I’ve been asked many times during interviews if I’ve seen their games and know generally how things work. Usually, if you haven’t been to a game or have worked in that sort of sport before, you might not get the gig.

And of course, be patient. You may not land your “dream mascot job” right away. Be persistent and keep working on your skills. Make connections and network. Make yourself a valuable asset (sometimes familiarizing yourself with a little marketing, PR and community relations will be helpful).

Q: Do you have any advice for casual performers who find themselves in their organizations’ mascot costumes?

A: If you’re not a full time or “hardcore in-the-suit-all-the-time” performer and find yourself volunteering (or being volunteered) to wear the mascot costume, I offer you this advice: Be peppy and active as people don’t really notice a mascot who just sort of stands there and doesn’t move. Keep up on your fluids; your costume will get hot! Be mindful of the blind spots your costume may have. Kids and objects can be easily missed! And most importantly, have fun! Sure, you’re the living and walking representation of your organization but you are also a character! This is your chance to be someone else, act silly and go all out for a while. Enjoy it!

Q: You have a full entry in your blog (mascotsunited.wordpress.com) about safety; is there one safety guideline you feel prospective performers should really keep in mind?

A: Picking just one is not easy.   There are a lot of things a new performer should keep in mind, most of it being simple stuff. But, I have to say based on my own experience from my rookie days that there is one thing other rookies should remember.

When I was a teenager, my first professional mascot job was with a minor league baseball team in Maryland as a coyote. Prior to this, I had just been a mascot at high school and had never worked in costume outdoors in the summer. I was told to keep hydrated and drink plenty of water and gatoraide (or its store brand equivalent) but for some reason, I never really followed through with that. I drank some water and never touched an electrolyte sports drink and really didn’t think too much of it. On one particular hot summer day, I had a very minimal amount of fluid and I found myself in the coyote suit at the game. This game had me extremely busy with extra promotions without any down time in between them, and in each one, I had to do a lot of running. By the bottom of the third inning, I was hot and feeling woozy. I had just finished another promotion that had me sprinting across the field and I was eager to get back into my dressing room to take a break. However, as I got off the field and made my way back to the concourse, I was surrounded by countless fans who wanted autographs. There was no way out of this. My arms and legs began to tingle and I was getting dizzy. I knew something was wrong, especially when breathing became harder and harder to do. Luckily, by this point, I signed everything and the crowd had dispersed. I staggered into the dressing room and took off the mask and sat down. I gasped for breath and felt my arms and legs go numb and I couldn’t move them. My head was spinning. Luckily, one of our promotions interns spotted me and got help. They ripped the costume off of me and had to force feed me fluids and salts; I was heat sick and on the verge of passing out. I was sent home after I had recovered and was rightfully given a lecture by the EMT (who knew me) on how to stay properly hydrated. To this day, I carry a bag with me to every game and event that is fully stocked with water and electrolytes.

Nick Hadad began mascot performing as a mascot in 2001 in high school. He started a small freelance mascot business in 2003, bringing costumes to life for local businesses and events. After moving to western New York in 2005 he worked for seven teams at once. He has since cut back his workload and currently mascots as R. Thunder and various talking mascot characters for two wildlife education groups.